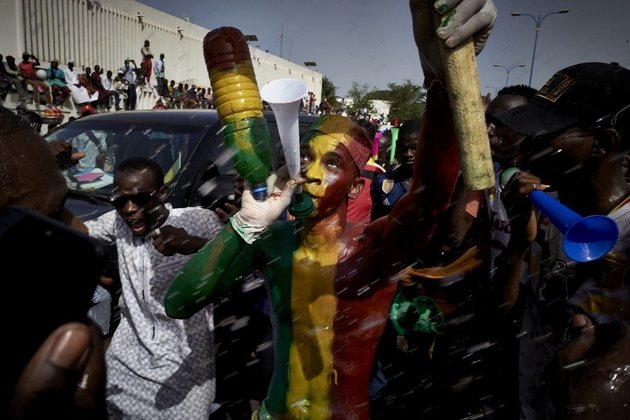 The alliance called on the public "to maintain and step up this mobilisation until the aim is achieved, which is the resignation of the president."

It planned to unveil future strategy in a news conference later Saturday.

Meanwhile, however, security forces broke into an opposition meeting that was examining ways to pursue the campaign of civil disobediance and obtain the release of those who had been arrested, spokesman Kaou Abdramane Diallo said.

Security officials "were looking for armed men, and came in cars and rammed the gate", an opposition member said on condition of anonymity.

On Saturday, officials counted the cost of the violence.

"The material damage has been considerable: six vehicles burnt, the windscreens of seven vehicles smashed, the machine to digitalise the archives stolen -- it was new -- and the server of the news programme and other material damaged," the head of the state-run television and radio network, Salif Sanogo, told AFP.

The television station resumed broadcasts on Saturday and was being guarded by security forces.

Bamako bore signs of the unrest with many roads littered with rocks and stones and the remnants of barricades.

Overnight, security forces regained control of two of three key bridges over the Niger River that had been taken over by protesters.

Such unrest is rare in Bamako, which has been spared much of the violence that is routine across swathes of Mali.

The country has been struggling to contain an Islamist insurgency that first emerged in the north in 2012, before spreading to the centre of the country and to neighbouring Burkina Faso and Niger.

Thousands of soldiers and civilians have been killed and hundreds of thousands of people have been forced from their homes.

Similar protests took place in other Malian cities as well.

The opposition's call for civil disobedience includes suggestions such as not paying fines, blocking entry to state buildings and occupying crossroads.

After weeks of growing political tension, Keita gave a speech Wednesday in which he offered to appoint new judges to the constitutional court.

It has been at the centre of controversy since April 29, when it overturned provisional results for March's parliamentary poll for about 30 seats.

That saw several members of Keita's party elected and triggered protests in several cities and is widely seen as having ignited the country's latest crisis.

US special envoy to the Sahel J.Peter Pham called the events "worrying," and warned: "Any unconstitutional change of government is out of the question."