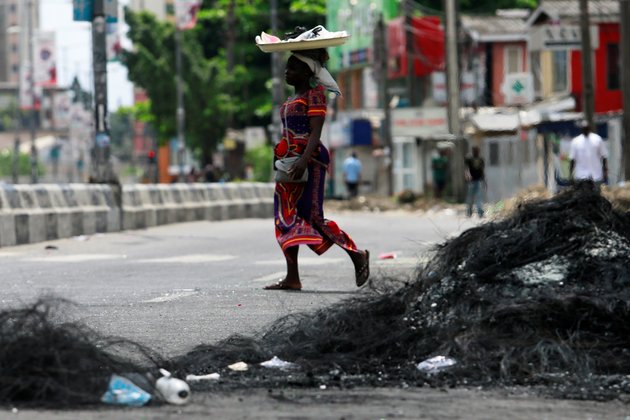 Roads Blockedin Nigeria in Defiance of President's Call for Calm

Major roads in Lagos, Nigeria were blocked Friday by groups of people armed with knives and sticks, many of whom were angered by the president's speech that appealed for calm but failed to denounce the police killing of peaceful protesters demanding an end to police brutality.

In his first public comments Thursday on the unrest gripping the West African country, Nigerian President Muhammadu Buhari urged youth involved in the protests to end demonstrations and begin a dialogue with the government.

However, Buhari did not mention the police shooting of peaceful protesters at Lekki toll plaza earlier this week that resulted in the deaths of at least 12 protesters. Nigeria's military has denied responsibility for that shooting.

On Friday, the president's office acknowledged that "many lives have been lost" in the unrest but still did not disclose the death toll. The office said Buhari made the comment in a meeting with former heads of state on how to address some of the country's most intense violence in years.

Also on Friday, U.N. Secretary-General Antonio Guterres said Nigerian authorities must "not abuse force when dealing with demonstrations" and that he received assurances from Buhari.

"I heard from the president his strong commitment to do everything possible to avoid these kinds of incidents and I hope it will be the case in the future," Guterres said.

On Thursday, U.S. Secretary of State Mike Pompeo condemned the police brutality in Lagos and called for an investigation.

"We welcome an immediate investigation into any use of excessive force by members of the security forces. Those involved should be held to account in accordance with Nigerian law," Pompeo said in a statement.

Amnesty International on Wednesday reported that a total of 38 people died in protest-related incidents on Tuesday. Amnesty International also said at least 56 people have been killed over the past two weeks in protests directed at the police Special Anti-Robbery Squad, known as SARS, which the international rights group accused of torture and murders. The government disbanded SARS last week, but that has not tempered the outrage.

Congressional Black Caucus member Sheila Jackson Lee, along with caucus members Barbara Lee and Frederica Wilson, sent a letter to the Nigerian president demanding an end to the violence, the release of those who have been arrested and an investigation into the shootings at the toll plaza.

U.S. Democratic members of the Senate Foreign Relations Subcommittee on Africa also condemned the police brutality and called for "an immediate end to the violent crackdown on peaceful protestors."

"That security forces have used live ammunition against peaceful protestors demonstrating against police brutality is especially alarming. We urge security forces to act with restraint and for Nigerian authorities to de-escalate the situation and hold perpetrators of violence to account," Senators Chris Coons, Cory Booker, Tim Kaine and Chris Murphy said in a statement.

Lagos authorities have not been able to fully enforce a curfew as anger continued to escalate. The Lagos government said Friday the curfew would be eased on Saturday, remaining in effect from 6 p.m. to 8 a.m. local time.