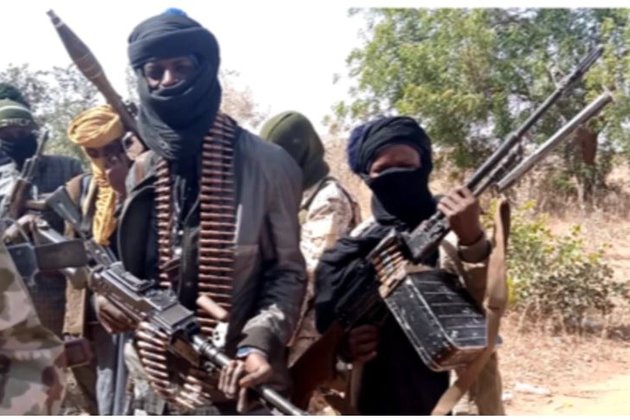 SUBUBU FOREST, ZAMFARA STATE, NIGERIA - In Nigeria, Friday's predawn abduction of 317 female students from a government school in Zamfara state was the latest in a surge of kidnappings in the country's north.

It's not yet clear who was responsible for the girls' abduction. But members of an armed gang who met with a VOA Hausa reporter and another journalist at their Sububu Forest hideout in Zamfara earlier this week contend they - and others like them - have turned to hostage-taking and other crimes because they have little choice to survive.

They said these "bandits" are mostly ethnic Fulanis like they are, traditionally nomadic herders who have seen public grazing lands shrink and their cattle and sheep stolen by soldiers and rustlers. They said various governments have neglected and even harassed them - and failed to protect their way of life.

"Everyone knows we are herders. This country is blessed with oil and other natural resources," but that bounty doesn't filter down, Shehu Rekep, the group's deputy, said in justifying its crimes. "We have not been educated, we don't have security, and the government is not doing anything for us. We are being killed, but we are always reported as the killers."

Armed men on motorcycles fetched the journalists from an appointed meeting place to visit the gang's forest hideout in the far northern part of Zamfara state for an interview last Monday. Someone fired a gun skyward, announcing their arrival. Roughly 30 men milled about the clearing, soon joined by at least 20 others, including several women. Most wore scarves that covered their faces, and they carried assault rifles. Some had rifles equipped with rocket-propelled grenade launchers.

They gathered near a man sitting on a carpet beneath a shade tree. Rekep introduced him.

Halilu commands a network of about 1,000 bandits in Zamfara state, his deputy said. The leader also claims to control some gangs in southern Nigeria. Rekep also wields influence, citing connections to bandits in the French-speaking countries of Mali, Senegal, Burkina Faso, Cameroon and Central African Republic.

Rekep said that, in a peace deal negotiated two years ago between his gang and communities in the Shinkafi government area, the gang provides protection in exchange for a relatively undisturbed base of operations.

Traditional herders took up arms out of desperation, the group's leaders said.

They said central and state governments in the last 20 years have abandoned herding communities, failing to provide academic or religious education or other social services, with limitations on grazing rights - particularly in Nigeria's south - leaving them illiterate, jobless and hopeless. They also said herders face excessive taxes when trying to sell their livestock at market, and sometimes encounter extortion or brutality by military and police personnel.

Shehu Rekep, deputy of an armed group of "bandits" in Nigeria's northwestern Zamfara state, contends they have taken up crime because government hasn't protected their livelihood as herders.

The bandit leaders told VOA that many of their members have lost relatives in clashes with security agents and rival groups.

"Security forces and vigilantes kill us," Rekep said. "We also kill every day."

He also said that captives are released when ransom is paid - but that bandits will shoot anyone who resists them. He did not disclose how many people had been killed because ransom demands went unmet.

Amnesty International reported last August that bandits have waged "terrifying attacks on rural communities" in northern Nigeria for years. It said attacks in the country's northwest and north-central regions had escalated since January 2020, with "rampaging gunmen ... [killing] at least 1,126 people" by early August.

Dismayed by the growing insecurity, a Kaduna-based Islamic cleric in February began visiting bandit camps in the northwestern states in a self-appointed attempt at mediation. Ahmad Gumi, who earlier served as a Nigerian army captain, has conveyed their grievances to some governors in the region.

"There's no presence of government in the bush where they live. They have no social amenities, such as schools or hospitals. Unfortunately," he added, "they don't have enlightened and educated leaders."

Gumi also said, "These nomads face multiple challenges from local officials, including police and judiciary who often brutalized them. ... These kind of people deserve compensation.''

Like Gumi, Samuel Aruwan, commissioner for internal security in neighboring Kaduna state, told VOA that past governments had neglected Fulani herders. He said authorities had done little to halt cattle rustling, effectively putting the herders out of business.

But Gumi's advocacy for the bandits has drawn fire. A group called the Northern Elders Forum last week issued a statement urging the cleric to stop his tour of bandit camps, saying his public remarks were "encouraging terrorists" and "putting the lives of non-Muslim soldiers in grave danger."

Videos of meetings between Gumi and armed bandits also have raised questions about the cleric's ability to gain access to their hideouts while security agencies - which claim to be hunting the criminals - have failed to do so.

FILE - In this photo released by the Nigeria State House, Nigeria's President Muhammadu Buhari addresses the nation on a live telecast, Oct. 22, 2020.

But authorities in federal and state governments have been criticized for paying large ransoms.

"Between 2011 and 2020, Nigerians paid more than $18 million to liberate themselves or loved ones," The Washington Post reported this week, citing data from the consulting firm SB Morgen.