ABUJA, Oct. 20 (Xinhua) -- Nigerian President Muhammadu Buhari and his Turkish counterpart, Recep Tayyip Erdogan, on Wednesday oversaw the signing of eight bilateral agreements on such areas as energy, defense industry, mining and hydrocarbons during their meeting in the Nigerian capital.

Erdogan arrived in Abuja on Tuesday on a two-day visit to Nigeria, the last leg of his Africa tour that also took him to Angola and Togo.

Buhari told a joint press conference that during Erdogan's visit to Africa's most populous country, the two leaders had "useful discussions on a number of bilateral issues, aimed at strengthening this cordial relationship between Nigeria and Turkey."

The key issues touched on included a series of agreements and memoranda of understanding (MoUs) that had been finalized, the Nigerian leader said.

"As a positive outcome, eight major agreements/MoUs on a number of the key sectors including energy, defense industry, mining, and hydrocarbons, among others were signed today," he said.

Buhari said Nigeria has removed Turkey from its travel ban list, having reviewed the list based on revised COVID-19 protocols.

In his remarks, Erdogan said Turkey is determined to push relations with Nigeria to "higher levels on all fields."

He noted that trade between the countries reached 2 billion U.S. dollars in 2020, making Nigeria the biggest trading partner of Turkey in sub-Saharan Africa.

"However, we still believe that this level of trade we have achieved is far from being adequate. We hope and pray that we will be expanding our trade volume up to 5 billion dollars immediately," Erdogan said.

He expressed the hope that relations between the two nations will be "further developed on the basis of a win-win scenario and mutual respect."

The Turkish president also pledged that Ankara would further cooperate with Nigeria on counter-terrorism, as well as in the fields of military, defense, and security.

Erdogan said Turkey has expanded its diplomatic presence in Africa to 43 missions, and that the third round of the Turkish-African business forum will be held in Istanbul this October while the third Turkish-African partnership summit will follow in December. 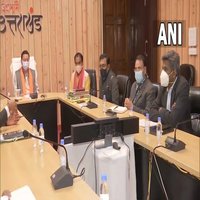