ABUJA, Nov. 22 (Xinhua) -- One of the biggest life dreams of Mukhtar Musa-Daud, a young Nigerian livestock farmer, is to establish one of the largest rabbit farms in Africa's most populous country.

Since leaving the university five years ago, Musa-Daud has refused to accept a white-collar job as advised by his parents, especially his mother, who, he said, "told me to get serious with my life, and get something doing."

"I wanted to study veterinary medicine due to my love for animals and livestock in general. I studied microbiology instead. I found out that I have a flair for farming and I have a good hand for livestock," the 28-year-old told Xinhua in a recent interview at his rabbit farm in Kuje, a neighborhood known for having a huge expanse of farmlands in a suburb of Abuja, the Nigerian capital.

Musa-Daud has been into rabbit rearing for three years now, with customers patronizing his business from all regions of the West African country. He is one of a large number of young entrepreneurs investing in farming as an enterprise, inspired by the government that has been seeking to diversify the economy from oil, as well as the productive farming techniques from China.

Unlike in China and some countries in Europe where rabbits are a common source of meat, in Nigeria, people eat them as bushmeat when they are already processed.

Musa-Daud said his inspiration to have one of the largest rabbit farms in Nigeria stemmed from some online videos he stumbled upon introducing Chinese livestock farmers.

"I got the inspiration to do rabbit farming from the Chinese, and also from our traditional way of farming," he said, disclosing that the automated feeding and water-drinker system for his rabbits were all concepts he learned from China.

He said the Chinese farmers have the skills to rear rabbits for high production with very limited space, and that he looked forward to a trip to China to learn from his Chinese counterparts.

China and Nigeria have in recent years implemented a series of programs in the field of agriculture cooperation, providing technical training in agronomy, water conservancy, fisheries, and animal husbandry for Nigerians. Innocent Mokidi, a Nigerian farmer, is one of the beneficiaries of such capacity-building programs.

"If you want to achieve food security, you should be able to have enough. It is not the number of hectares of farmland, it is what you are bringing out of that hectare. These are the things we need to achieve food security. With knowledge, we can achieve a lot of things," said Mokidi, who already produces good yields in maize, soybeans, cowpeas, sesame, groundnut, and tomatoes.

So far, the crop production expert has participated in three Chinese government-organized training programs, having attended two physically and another one through video link.

"Those training opened my mindset to different things entirely," he said.

Garba Shehu, spokesperson for Nigerian President Muhammadu Buhari, told Xinhua in a recent interview that there is great potential in cooperation on agriculture between Nigeria and China, as agriculture is regarded as one of the pillars in the government's plan of economic diversification and food security.

"ERGP (Economic Recovery Growth Plan) seeks a number of objectives including the fact that this country should be able to produce the food that we eat. As it is right now, we know that the Chinese government is reliable in agriculture particularly in the provision of improved seedlings that will lead to far bigger harvest," Shehu said.

Nigeria's agricultural sector contributed 23.78 percent to the country's overall gross domestic product in the second quarter of 2021, the Nigerian Bureau of Statistics said in August, noting crop production, livestock, fishing, and forestry as the four sub-activities making up the agricultural sector.

Local economic analysts believe apart from assuring income generation and food security to sustain the nation's economy, agriculture remains one of the most important means for employment, driving poverty reduction through links to other sectors, increased productivity, and value addition.

Agriculture has provided employment for about 35 percent of the Nigerian population, according to 2020 data by the Food and Agriculture Organization of the United Nations.

By aspiring to establish one of the largest rabbit farms in his country, Musa-Daud said he aimed to provide more jobs while helping people to improve their health.

"With the rising cases of diabetes and other cell illnesses in the country, I have decided to go into rabbit production to improve people's health by producing something suitable for the body," he said, advising that agriculture could be a great business for young Nigerians.

"The few young people going into agriculture are doing something different. It is adding a lot more to the system. Gradually and steadily, more young people are embracing the culture of agriculture and they are seeing the benefits," he enthused.

Israel Abraham Konfa, another young Nigerian who invested in fish farming in 2017, said he has so far achieved financial stability through the enterprise. The young agropreneur currently has a large fish farm sitting on two plots of land behind his parents' house in Abuja, with an aspiration to move to a bigger place by next year.

Konfa believes there are still prospects for him to break into the big market, after deeply studying the Chinese agriculture and aquacultural sectors.

"For my aspirations, I think the sky is the limit," he said, noting there are huge prospects for growth and expanding his business.

"One major thing I will like to learn is feeding production. If I can learn that, I will be a far better farmer than I am," he said. 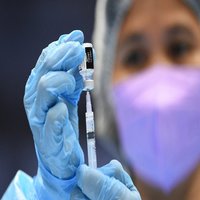 BioNTech works on its answer to new Covid variant