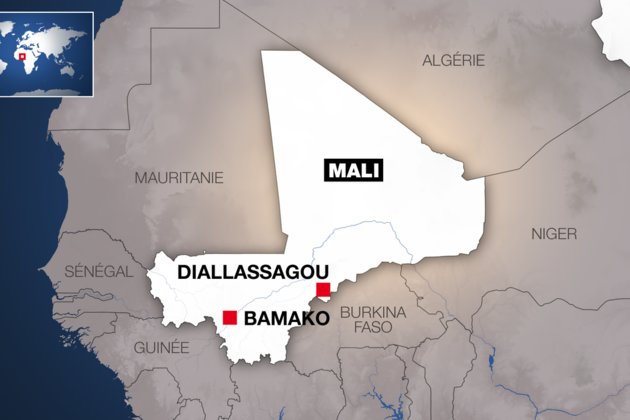 Mali in national mourning over civilian massacres in Sahel

Local officials reported scenes of systematic killings by armed men in Diallassagou and two surrounding towns in the Bankass circle, a longtime hotbed of Sahelian violence.

"They have also been burning huts, houses, and stealing cattle -- it's really a free-for-all," said a local official who for security reasons spoke on condition of anonymity.

He and another official, who like him had fled his village, said the death toll was still being counted on Monday.

Nouhoum Togo, head of a party in Bankass, the main town in the area, said the toll was even higher than the 132 announced by the government, which has blamed Al-Qaeda-affiliated jihadists for the killings.

The national authorities broke their silence on Monday afternoon after alarming reports proliferated on social networks over the weekend.

Togo told AFP that army operations in the area two weeks ago had led to clashes with jihadists. On Friday, the jihadists returned on several dozen motorbikes to take revenge on the population, he added.

"They arrived and told the people, 'You are not Muslims' in Fulani, then took the men away, and a hundred people went with them," he said.

"Some two kilometres away, they systematically shot people."

He said the bodies continued to be collected in the areas around Diallassagou on Monday.

Central Mali has been plagued by violence since the Al-Qaeda-affiliated organisation emerged in 2015.

A large part of the area is beyond state control and is prone to violence by self-defence militias and inter-community reprisals.

Since 2012, Mali has been rocked by an insurgency by groups linked to Al-Qaeda and the so-called Islamic State group.

Violence that began in the north has since spread to the centre and neighbouring Burkina Faso and Niger.

Civilians are often subjected to reprisals by jihadists who accuse them of collaborating with the enemy.

Some areas of the country, especially in the centre, have fallen under the jihadists' control.

The military ousted the civilian government in 2020 over its inability to halt the violence, and has said the restoration of security is its priority.

But civilians still often find themselves caught in the crossfire between armed groups, including those affiliated with Al-Qaeda and the Islamic State.

Nearly 600 civilians were killed in Mali in 2021 in violence blamed mainly on jihadists, but also on self-defence militias and armed forces, according to a UN document published in March.

The UN has expressed alarm in Security Council documents at the deteriorating security situation in central Mali, as well as in the north and in the area along the borders of Burkina Faso and Niger.

Not far from those borders on Saturday, around 20 civilians were killed in the northern region of Gao -- about 500 kilometres west of Bankass.

UN investigators denied access to site of Mali killings 'End of an era' as France pulls out of Mali. Was the mission a failure?

The number of civilians killed in attacks attributed to extremist groups has almost doubled since 2020 in the central Sahel, a coalition of West African NGOs said in a report released Thursday.

Last Wednesday, an armed group reported the death of 22 people in the Menaka region, right by Niger's western border.

In northern Burkina Faso, 86 people were killed in June in Seytenga.